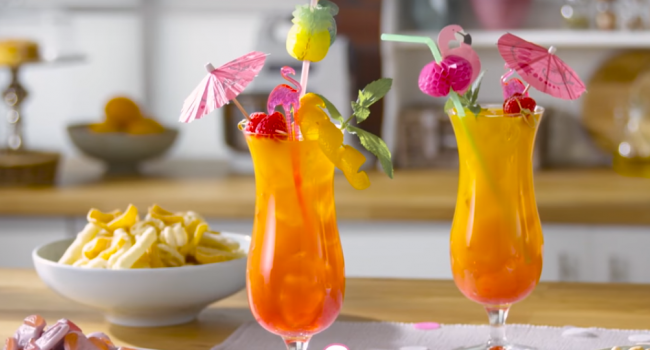 There’s no better time of year than Halloween to get your buddies together and party. We didn’t do too much last year, so I was dead set on getting something together this time around. Ultimately, we decided to have some friends over to dress up and watch the Walking Dead premiere, so I made a couple of appropriately themed – and secretly alcohol-packed – concoctions.

We had fun. And the next day all my friends hated me.

Reason number one for all that hates was my Zombie Punch. This was a fun experience for me, since I had never made a Zombie before, but had always wanted to. Zombies are a tricky cocktail to get right. It seems like most Zombies out end up too sweet and sticky to cover the taste of alcohol. I recently had a nice Zombie at Painkiller, so I was inspired to make this punch right.

But I made a couple of changes. Instead of Jamaican rum and Gold Puerto Rican rum, I used Palo Viejo Puerto Rican white rum) and Rheum Barman court 5 Star (a Haitian Gold rum). Why the change? Well mostly because I already had the Palo Viejo and then forgot what kind of Gold rum to pick up.

But I was glad to try this combo. I think – and I’m looking forward to testing this theory – that the combination of rums is the most important part of making a good take drink. Knowing what different rums taste like and figuring out how to combine them in new ways seems like a fun thing to test out and get good at.

This particular combo worked out great. The Palo Viejo has a strong smell and sweet taste, so the more balanced and mature taste of the Rheum Barman court mixed well. The other big change I made was losing the Period/Herb saint addition.

I was concerned that the anise flavor would get to be too strong and take over the whole punch when I increased the recipe size, so I decided not to risk it. Instead, I used my super-secret favorite ingredient – Tamarind Nectar! It’s sweet, but, like lime juice, it has a mysterious depth of flavor when mixed in cocktails.

So I took the above and mixed it into a big old’ pitcher. Then I filled a shaker with ice, added as much as I could from the pitcher, shook it up real good, and poured it all – ice included – into the punch bowl. It took about three shakers-full to empty the pitcher. And I refilled the pitcher three times. So, I used the amounts above three times over.

I had to make one other change in the last batch, as I ran out of Palo Viejo. I threw in a little apricot brandy (saw it in another recipe somewhere and ended up buying some) to give that batch a little extra alcohol, and to see how it would affect the flavor. It turned out nice! Apricot’s another one of those flavors that has a neat depth to it.

The ingredients that I was most excited about in this punch were the faller numb and Don’s Mix. Faller numb is sweet liquor that has sort of an almond/honey/ginger taste that is good. I never really had much before, so I was excited to find that it’s quite good on its own over a little ice. I used John D. Taylor’s Velvet Faller numb, which is 11% alcohol.

Don’s Mix is a cinnamon syrup and grapefruit juice. It is amazing, and I highly suggest you make it yourself (rather than buy the pre-mixed kind) and put it in everything. Mine ended up using BROWN sugar and WHITE grapefruit juice and it was incredible. I still have a bunch in the fridge. Hmm…

As the final touch, I floated in the ovenproof rum. The only brand I could find in my neighborhood was the Bacardi 151 (I don’t think I was the only “Let’s make Zombies for Halloween” guy out there…) and it worked great.

I was surprised at how good it smelled, considering how strong that stuff is. I didn’t go for the full 10 oz. that my increased recipe called for – it was a work night after all – using just 6-7 oz. instead. It was plenty.

With a little more ice and a touch of black food coloring for added scary, the punch was done and ready for consumption! I badgered my unfortunate party-goers about it, and everyone seemed to think it genuinely turned out ok.

As for myself, I was pretty happy. It wasn’t perfect for sure, but it also wasn’t super sweet or syrupy, which was my goal. The rum taste was evident, but not overbearing, and the tamarind juice went a long way to help mitigate the strong, acidic kick that can sometimes ruin take drinks – for me anyway.

But what about the Skittles infused vodka, you ask? Hey, I didn’t forget. I just got super psyched about Zombie Punch!

Let me preface this by saying one thing: I hate making Skittles infused vodka. Hate it. It’s sticky and time-consuming and I hate it. But the results are just too satisfying not to.

It should be a straightforward process. Separate Skittles by color and put it in vodka overnight. Next day, stir it up a bit and filter through coffee filters. Done. Easy. But for me, the filtering part never works. I always have to give up on coffee filters because they take so dang long and just use paper towels instead. At any rate, it eventually worked out, and I had five little bottles of deceptively sweet vodka to share.

The Year of Sustainable Best Foodies for All

The Year of Sustainable Best Foodies for All

The Dabble in 3 Famous Restaurants Food in Yen Ta Fo