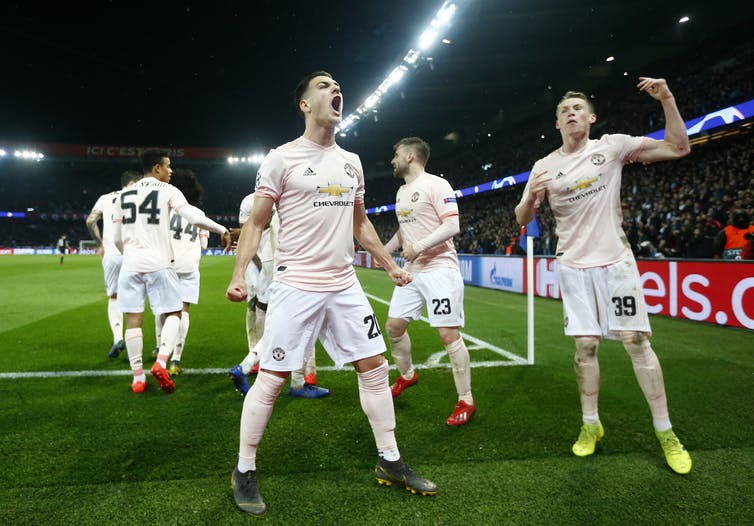 Over the last couple of weeks, several pieces of news (which most commentators have termed “scandals”) have rocked what is Europe’s most popular and best-funded sports franchise: football or soccer for US readers.

On the field, France, one of world football’s historically strong nations (FIFA World Champion, runner-up), ended up qualifying in extremist for the final phase of the FIFA World Cup (to be held in South Africa in June) thanks to a last-minute equalizing goal in its last-chance qualifying match against Ireland.

That goal was only made possible by a very clever technical move by Thierry Henry, an experienced French striker, to control the ball (twice) and pass it on to one of his teammates just a couple of meters away from the net, leaving him with an easy header.

The only slight issue is that Henry’s ball-control prowess made abundant use of his left hand (see picture right) – and that the game’s referees seem to be the only ones not to have noticed it. To universal dismay, the goal was declared valid, Ireland’s pleas to replay the game fell on deaf ears, France got through, and the rest, as they say, is history.

Only that this time, the foul was so blatantly obvious that even FIFA was forced to admit its existence. But it continued to hide behind the sacra-saint irrevocability of the referee’s decisions and insisted that, unless France requested to replay the game (fat chance, since the French were all too happy to scrape through), it did not have the power to overrule the game’s result once it had been validated by the referee’s final whistle blow.

Off the field, German investigators, after a long undercover operation supported by UEFA (European football’s governing body), have uncovered what looks like a “high-level match-fixing” scheme involving more than 200 people.

Many were arrested in Germany, Switzerland, and other European countries, on suspicions of attempting to rig dozens of match results across 9 European football leagues (none of which is a top-flight league), by bribing players, coaches, referees, and officials. The criminal gang is rumored to have made millions by betting in Asian markets on those games.

Those 2 pretty extraordinary events have led FIFA President Sapp Blotter to call an Extraordinary GM of FIFA’s Executive Committee on December 2 (the EC in corpora is in South Africa anyway, to attend the draw of the football World Cup’s final phase games).

Beyond the eye-catching headlines, which lessons can be drawn from that sad and disturbing news, in terms of sports management?

FIFA, in its capacity of football’s governing body, has been bizarrely reluctant to embrace technological change, at least as far as refereeing is concerned. While video-replay assistance has been successfully rolled out in tennis long ago, allowing line judges to avoid McEnroe-style outbursts, it has been on the backburner for years in football, even though extensive video coverage of football games has now become near-ubiquitous.

Video assistance is a technology whose time has more than coming in football, as the Henry incident sadly but vividly illustrates. A sport which is so well-funded, but above all in which such large sums are at stake, just cannot afford anymore to rely exclusively on the referees’ very human (i.e. fallible) appreciation of delicate situations.

It should be ashamed not to leverage all of the technology it can (amply) afford. It is now a question of how and how quickly, rather than if. The same recommendation is made by Russell Szigeti in this excellent post (which I am only belatedly noticing) and logically extended to other sports.

There seems to be a real issue with football’s current revenue-generation and -sharing model. Attempts to rig match results in Europe (and on such a large, pervasive scale) are an indicator of a potentially destructive misallocation of available funds, and their overabundance.

Gangsters are tempted to take their stab at (illegally) grabbing a share of football’s gigantic revenues because the sports’ financial interests are tragically not aligned with its strategic objectives: who cares if teams play a good and fair game for fans, as long as equipment manufacturers, sponsors and team managers are happy (and wealthy)? FIFA ought to seize the opportunity brought about by the latest European match-fixing affair to rethink the way it manages the sport’s finances.